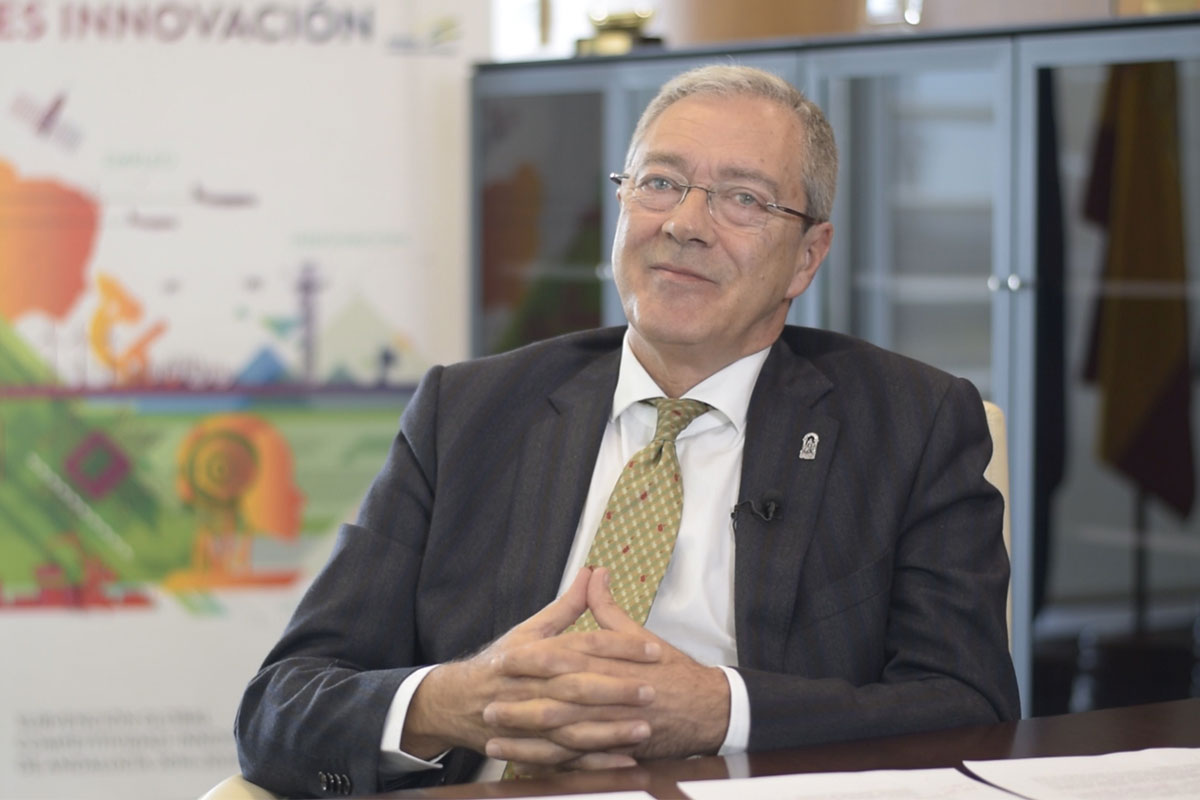 Posted at 14:16h in andalusia, interview by Author One 0 Comments
0 Likes
Share

The COVID-19 pandemic has advanced a global trend toward teleworking. Highly qualified professionals, whether they operate in industrial or service sectors, now have the option of working remotely from anywhere in the world. Consequently, many are now considering where they want to move to. The general appeal of Andalusia as a place to visit or live is clear: it receives one of the highest number of tourists a year, and is also home to many foreign retirees and owners of second residences. What are some of the advantages the region offers for remote workers specifically?

The ultra-fast fiber-optic infrastructure network in Spain is the third largest in the world after Japan and South Korea, although that might be difficult to believe. In Spain, the fiber-optic network is larger than in France, Germany and Italy all together. This has been the consequence of the liberalization of the sector and of very strong competition among the main players. And as a result, nowadays a large part of the Spanish territory, including of course Andalusia, has a high-speed network, first from fiber optics and now the 5G mobile network is spreading. This provides extraordinary facilitation of working remotely from home or any location to all self-employed people or employees who can be operative wherever they may be.

In the case of independent professionals, this has gained a lot of intensity and that will certainly remain; professionals have discovered, for example, that in a village on the coast of Cádiz, like Vejer, one lives magnificently and there are good communication networks to work with. Companies will have to adapt gradually to the new environment. Regional authorities will also have to do that. When things settle down, we will see how employees in many cases—depending on the sector—will spend no more than two or three days at the office and the rest at home. This is very beneficial for both workers and companies. It makes life easier for employees and gives them extraordinary flexibility to live wherever they want. And it enables companies to reduce costs: they will need fewer spaces to rent, they will consume less energy and so on.

I am optimistic about the possibilities that Andalusia has for attracting professionals and companies that are physically located, it doesn’t matter where, but that from here can do exactly the same thing. From an environmental point of view, the quality of life that Andalusia offers is excellent; for national and international connections as well. Malaga airport, for example, has flights to more than 90 international destinations. Probably only Madrid and Barcelona can match it. Especially noteworthy are the connections with different German cities, with practically daily flights. Logically, this influences people’s decision about where they want to live.

One aspect that these new emigrants will look at more closely is the tax burden on residents and on the work they do here. Given that the tax burden in Spain differs a lot according to the region, what is the situation in Andalusia?

Since the beginning of our legislature almost two years ago, one of the guiding principles of this government has been to reduce the direct tax burden on individuals. We did that last year. This year, we are introducing tax reductions again in the budgets, so we are already almost at the average in terms of tax burden per inhabitant with respect to Spain. This logically represents an additional incentive to come here. And the trend to reduce personal taxes will continue to the extent that this crisis allows it. We are making Andalusia an attractive place to work and live.

Another important criteria for attracting international talent is the ability to create companies that can have international presence. What incentives does Andalusia offer for new companies and what economic sectors is it promoting?

Andalusia is a region that is eligible for European Union Community Funds, especially European Regional Development Funds. This is an advantage, since companies can access community aid by meeting certain size requirements especially and through the type of activity they are engaged in. At the Economic Transformation Department of the Regional Government of Andalusia, we are stepping up our actions in two areas: attracting and internationalizing companies. In terms of attraction, through the Innovation and Development Agency of Andalusia (IDEA), we have developed an intensive roadshow program in Europe, holding meetings with British, German, French, Italian and Dutch companies, entrepreneurs and investments funds. With the pandemic, the face-to-face format has been transferred to online, but it has been maintained and with a successful result, which encourages us to continue.

In addition to attracting and internationalizing companies, we are also devoting a lot of effort to modernize and make the technology parks in Andalusia more competitive. I want to highlight particularly the Technological Park of Health PTS in Granada that specializes in health services, as well as the Science and Technology Park (PCT) Cartuja of Seville, which is more diversified with a preponderance of ICT firms, but that also has biotech and renewable energy companies. Finally, I would like to highlight Malaga TechPark—we have just changed its name due to its enormous internationalization. More than 600 companies meet in this technology hub and one third of employment there is generated by foreign firms. Malaga TechPark has a very ambitious expansion plan and it even has a waiting list of ICT multinationals.

I am putting all my personal effort into ensuring that Andalusian science and technology parks are great generators of investment attraction for high-tech companies, above all. Not in vain, I am president of the management companies of both Malaga TechPark and PCT Cartuja.

We believe in competition, competition between the public and private sector, and competition among private sector companies themselves. We are aware that in several provinces, especially Seville and Malaga, large companies in the health sector have installed hospitals that are competitive with good professionals, which complement the public sector offer. However, the Andalusian Regional Government is firmly committed to the public health sector. Let me give you an example: in next year’s budgets, public spending on health in Andalusia will reach 6 percent of gross domestic product. This had never been achieved before and it reflects the importance that this government attaches to health.

The region also boasts first-class public and private higher education institutions. Do any of these provide courses in English?

For several years now, the 10 public universities in the region have had groups that receive education entirely in English, particularly in fields such as business administration and management; also in some engineering and science departments. Therefore, indeed, foreign students can join practically any of the 10 Andalusian universities and will be taught in English. This is the result of having granted scholarships to university professors to carry out doctorate or post-doctoral courses abroad. They have returned, and are researching and teaching at Andalusian universities, with the added bonus of being able to do it in English.

You are part of a center-right coalition government whose electoral triumph almost two years ago ended dozens of years of management of the region by the socialist party. What have been the most important initiatives that your ministry has introduced since then to promote business?

I would point out two main initiatives. The first one is the simplification of administrative procedures with regard to the relationship of companies with the public sector. We have practically annulled 100 administrative acts that were completely useless. Therefore, today companies located in Andalusia find a much lighter regulatory environment, which facilitates the deployment of their productive activity. And secondly, our General Entrepreneurship Plan that faces its final stretch at the moment but from which we have already launched some outstanding programs. We have just launched the Startup Andalucía Roadshow initiative, a startup competition that will tour the eight Andalusian provinces and that we have developed in collaboration with the Chambers of Commerce. Initially, we will select 32 companies. Of these, 12 finalists will be chosen and from there 5 winners will emerge, who will receive training, mentoring and support for their launch, search for funding or internationalization. If this “Andalusian league” of startups works well, something we are sure of, we will repeat it year after year, so that it is a continuous source of visibility for those new companies that are being created in Andalusia. We are sure that the result will be a substantial growth of startups in the region.

Due to the importance of tourism in the Spanish economy, and particularly the Andalusian economy, a slower exit from the crisis in comparison to other European countries is expected. How is the Regional Government of Andalusia encouraging a faster recovery for its tourism sector?

We believe that tourism has indeed been a factor that has led to a greater reduction in gross domestic product. But nevertheless, we also believe that the recovery of the sector is possible through its modernization, looking ahead, without losing sight of digitalization and the search for higher-quality projects. In this sense, we would like companies in the sector to gain competitiveness through new technologies. On the other hand, we have established a “fast-track” process: a rapid procedure for the analysis of new projects in the tourism sector, so that all those that achieve an optimal level of excellence are those that receive special support to enable them to develop their investment project in Andalusia in an agile way. This will also improve the quality level of the Andalusian tourism sector, thereby generating wealth and quality employment.

Are there any other factors you would like to highlight to those readers who might be considering moving to Andalusia to live and work?

In addition to the quality of public health services that we have mentioned previously, I do believe that there is a level of training and talent in the Andalusian workforce that is excellent. In addition to professional training, in Andalusia we can boast of having 10 engineering schools, which offer up to 26 different degrees, nearly all of them. Many of the professors in our engineering schools and science departments have been trained at the best universities in the world, especially in the U.S. at the California Institute of Technology, Stanford University, Carnegie Mellon or Massachusetts Institute of Technology. And then they have returned to Andalusia to research and teach here. I can assure you that a very high level of training is guaranteed for those young people or families who decide to settle in Andalusia.