Mauritius: a substance-driven international financial center that knows how to capitalize on its niche markets 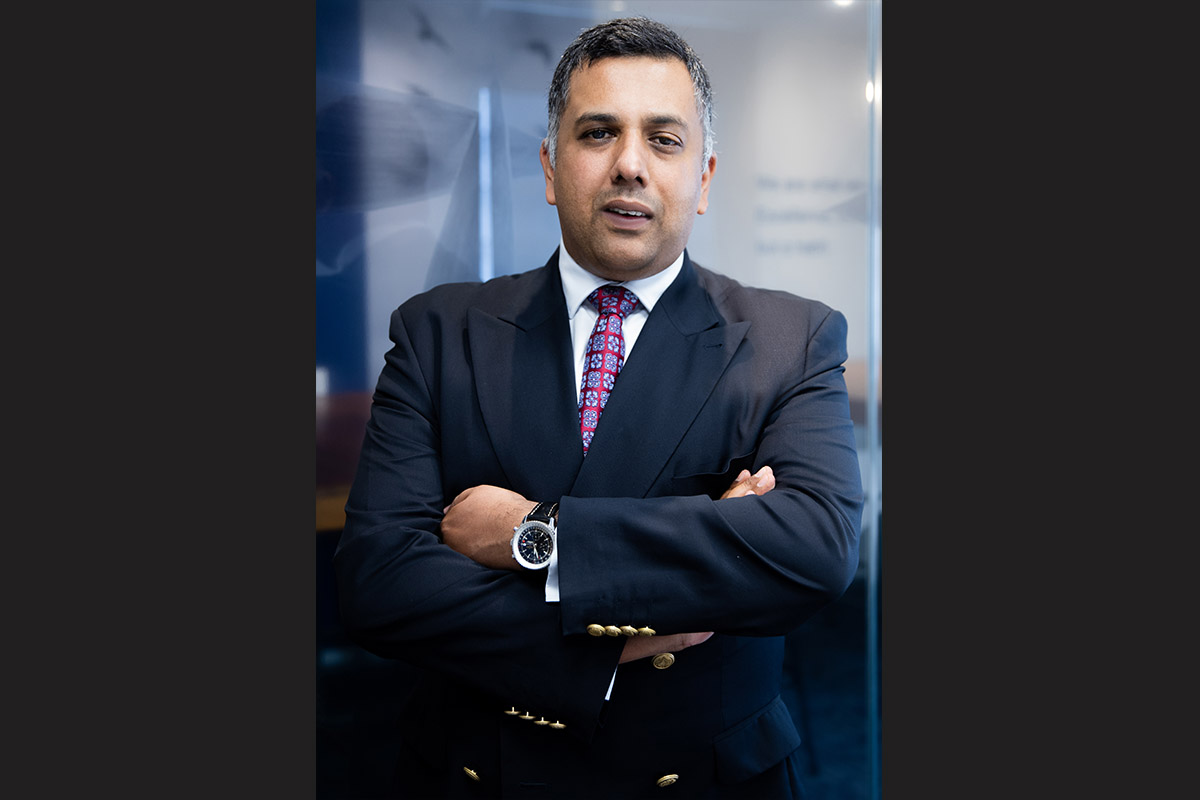 02 Apr Mauritius: a substance-driven international financial center that knows how to capitalize on its niche markets

Posted at 08:59h in interview, mauritius by Author One 0 Comments
0 Likes
Share

Kabir Ruhee, CEO, Rogers Capital, speaks about market consolidation and how grey listing was a blessing

Rogers Capital is a listed international services and investment company specializing in Fintech, hospitality, logistics and property. Its How would you describe the evolution of the company over the past several years? Can you highlight some of the biggest trends in the company’s operations?

My joining in 2007 coincided with a change in leadership. The new Group CEO, Philippe Espitalier-Noël, spelt out his priorities very clearly—the acceleration of our development and growth in some specific sectors, whether organically or through acquisitions. Until then, Rogers had had the characteristics of a traditional conglomerate focused on its turnover and on its diversity of business activities. Philippe’s leitmotiv is more geared towards a depth of specific offerings—tourism and hospitality, financial services, engineering, and strategic investments—and their returns.

Anything that didn’t fall within those four categories would either be disposed of or transformed. There has been a good deal of restructuring between letting things go and acquisitions. For instance, we acquired a number of hotels as well as the then-leading management company in Mauritius—Multiconsult—until it was integrated into our existing fiduciary business. We also launched the first listed property fund in the country. Overall, we became more focused, more market-centric and more customer-centric as an organization.

In 2012, the two most significant shareholders of Rogers mutually agreed to separate. One of them retained the businesses, which were mostly involved in financial services and retail, and the other maintained their interest in tourism, hospitality, property and logistics. From then on, we had a non-compete clause lasting two years, following which we rebuilt a financial services organization that tended more towards new technologies. From 2007, we became more focused, more outwards-looking and more internationally driven, making significant progress and taking on the battle for talent as one of our primary focuses. As a result, we have constructed a more resilient organization with clearer priorities, and this is going to be the way forward.

Would you say this shift reflects Mauritius’ evolution as a hub for IT, finance and outsourcing for Africa?

Yes. The Group has been investing in technology for at least three decades and, compared to others, we can be seen as a pioneer in the field. We have leveraged our already existing presence to further develop in this area, and history has proven us right; I used to say that software was running the world, but now I’d say it is actually ruling it. For us, it was only a matter of incremental adjustment rather than a complete restructuring or a greenfield venture.

A significant proportion—probably north of 60 percent—of our revenue base comes from overseas. I would say it bodes well for our strategy as a jurisdiction to become a reference platform for services in this region of the world, especially between Asia and Africa.

How do you stay ahead of the competition with continuous innovation, whilst simultaneously fostering a competitive workplace to make the company a leader in its field?

The raw material of what we produce revolves around human capital. Attracting and retaining our talents is our core focus. We also believe in meaningful, continuous learning and that’s at the heart of our DNA. We keep an open mind and realize that we need to attract talent, especially from abroad from more mature jurisdictions. In a nutshell, our three priorities are talent, talent and talent.

Broadly speaking, what effect did the pandemic have on digital solutions at Rogers Capital? To what extent did it speed up the adoption of new technologies and how do you evaluate Rogers’ resilience during this time of crisis?

From a business continuity perspective, the transition went very well. Thanks to our existing capabilities, infrastructure, tools and skills, we have been able to activate our disaster recovery infrastructure seamlessly and this has enabled us to maintain a service both for our customers in Mauritius and overseas. It wasn’t, however, such a smooth ride for some of our clients and competitors. Our time was wholly spent assisting our customers in the transition.

It is clear that the pandemic exponentially accelerated the digitization agenda of corporations and governments. It also created more awareness and consciousness on matters of data privacy and the not-so-good news about cyberattacks. It made people understand that either you make digitization your priority, or you will face the adverse consequences of not having done so.

On the other hand, it also taught the world that, regardless of the traditional work modalities, there are other ways and means that can even mean an increase in productivity as long as you are well-equipped and you evolve in a resilient and redundant manner.

From a supply point-of-view and given that we are also a leading technology and telecommunications services provider, we’ve noted growing demand around technologies like Robotic Process Automation (‘RPA’) which is a massive efficiency and productivity driver, and which, by definition, requires no manual intervention. The second, and ancillary to that, is a whole range of AI and machine-learning solutions that have endless possibilities. These two significantly accelerated our inflows. We also accelerated our plans around cybersecurity and, as a service provider, we gained substantial market share in doing so.

How ready is Mauritius for the adoption of blockchain technologies? What role can blockchain play in your daily business operations, and how do you believe this will change the Fintech landscape in the years ahead?

We still have a long way to go. The technology may be simple in terms of how we conceive things, but deploying the whole system requires deep knowledge and sophisticated skillsets and these are unfortunately still scarce in Mauritius.

The government has made great efforts by showing its openness in terms of at least looking at the opportunities that could be leveraged, namely through a sandbox type of license. They have also put in a lot of effort via the regulatory framework around virtual assets. Having said that, if we want to leverage the technology we need to have more entrepreneurs who themselves will attract technical and functional expertise in that domain.

Blockchain is powerful in the sense that it enables a self-sufficient network of trust based on the addition of segregated trust at a unitary level. It creates a self-sufficient network of integrity and confidence that has invaluable implementation avenues, especially around transactional matters in highly regulated industries and activities. Financial services is one of the first among these.

In terms of the regulatory framework, what fiscal advantages can you offer your clients by being in Mauritius?

Fiscally speaking, there is not much of a difference with other sectors that are conducive to FDI, but Mauritius was probably one of the first African countries to come up with a comprehensive governance and regulatory framework. It relates to the management of virtual assets, including notions of custody. It is also quite broad, but just to have some protection of individual and institutional assets, as is already the case for other assets, is a solid first step in the right direction. When it comes to cryptocurrency, we still have a long way to go but, again, it’s something that is under discussion and hopefully we will come to an agreement sooner rather than later.

Investors and observers welcomed Mauritius’ exiting of the FATF grey list in October 2021, as well as its removal from the EU banned list in January. What signal do you believe these decisions will send to international investors and what overall impact could they have on investor and consumer confidence in Mauritius?

Being put on the list was quite a shock for us. But in hindsight, it was a blessing in disguise. We were extremely wary of the adverse consequences that such an exclusion could have had, not only in our financial services industry but for the whole economy. It created a sense of urgency for us to work heavy-handedly on certain areas. There is a tendency to draw lessons out of crises, and one of those in our case was seeing how, when the public and private sectors join hands, we can achieve a lot of great things.

The worry over what could happen was certainly much worse than what ended up happening. In our case, despite the FATF grey listing and the EU blacklisting, revenues continued to grow. The amount of credibility and alignment to international standards that we derived from it bodes well for our recovery and our positioning as a credible and substance-driven international financial center. It is easy to say this given the event is over, but it’s the kind of thing you have to endure to reach the next level.

Have you already seen an impact on your business operations following these announcements? What other jurisdictions might you be targeting in order to ramp up your overseas clients?

Our main markets remain Africa and Asia. We don’t necessarily intend to branch out to other continents; rather, we wish to consolidate within these two. We already have rep offices in Seychelles and Ivory Coast and plan on growing our presence in South Africa and the UAE soon. Rwanda is also a jurisdiction that we are busy assessing.

What do you believe are Mauritius’ competitive advantages? Why should investors come to Mauritius, and what advantages would a company have in outsourcing there?

We have the basics covered; that is, the rule of law and democracy. Mauritius is a liberal country with a fair electoral process. Our founding fathers made the right bets on education, making heavy investments in literacy. Mauritius is highly culturally diverse and this is a core strength that needs to be consolidated. We are making headway in that area.

Now is the time to open the economy fully. It is no coincidence that whenever we have practiced openness towards the world, we have been our most successful. We need to attract talent as opposed to high-net-worth individuals. We need to convince the best in the world to come to live and work in Mauritius demonstrating these attractive characteristics––our peaceful nature, good education infrastructure, prime location at the crossroads between Asia and Africa, and the fact that we offer all the comforts of any modern country.

Our value proposition is that we are a low tax jurisdiction that is conducive to business and entrepreneurship and attractive to private and foreign investments, and that the quality of life here is relatively high compared to that of our peers. Attracting talent should be our highest priority, just as Dubai and Singapore did. We need to replicate that here, and we certainly have the qualities need to do so.

Do you have a final message for readers?

Mauritius is at a crossroads. I sense that we could really leapfrog and upgrade to being a high-income economy in a very sustainable manner. The typical Mauritian is a welcoming person, avid to learn, aware of the importance of embracing various cultures, and harboring an entrepreneurial spirit. Therefore, I would encourage us all to gather together and try to do what essentially seems achievable. It might be tough work, but I am confident we can aspire to it.